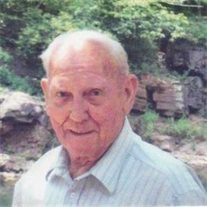 Rev. George "Jack" Tripp of Ironton, MO passed away February 5, 2012 in Fredericktown, MO at the age of 93 years. He was born August 16, 1918 in Cantwell, MO the son of George and Sefrona (Smith) Tripp. On August 4, 1940 he was united in marriage to Vivian Mae Webb who preceded him in death on July 15, 1993. To this union two children were born; Joyce and husband William Bullis of Ironton, MO and Roy Tripp of Kingdom City, MO. Also surviving are three grandchildren, four great grandchildren as well as a host of nieces, nephews, other relatives and many friends. Jack was preceded in death by an infant sister, Sue Tripp, and his brothers, Raymond, Oscar, Leamond, Melvin, Willard, and infant brother Herman Tripp. Jack worked at the Pilot Knob Mines and he was a General Baptist Minister for 53 years. He most recently attended Bethany Baptist Church. Visitation will be held Monday, February 6, 2012 from 5-8 P.M. Funeral services will be held on Tuesday, February 7, 2012 at 11:00 A.M. from Bryson Funeral Home Chapel with Rev. Randall Stevens officiating. Interment will be in the Arcadia Valley Memorial Park. Memorials may be made to Bethany Baptist Church.

The family of Rev. George Winford "Jack" Tripp created this Life Tributes page to make it easy to share your memories.