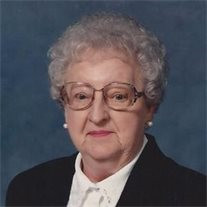 Faye Marie Hurst of Farmington, MO passed away July 14, 2013 at the age of 92 years, 6 months, and 24 days. She was born December 20, 1920 in Middlebrook, MO the daughter of Frank Eugene and Lucy (Bell) Rencehausen. On July 16, 1939 she was united in marriage to Oscar John Hurst Jr. who preceded her in death on January 1, 1998. To this union three children were born; Oscar "Jack" and wife Susan E. Hurst of Bunker Hill, IL, Deloris "Dee" Christian of Godfrey, IL, and Janet Marie Hanks who preceded her in death. Also surviving are twelve grandchildren; nine great grandchildren, and 2 great great grandchildren, her special friend, Harvey Hull of Farmington, MO as well as a host of nieces, nephews, other relatives and friends. Faye was preceded in death by four brothers; Edgar, John, Alfred, and Bill Rencehausen and six sisters; Ruth Schrum, Emma Koewing, Ethel Goggin, Nettie Hughes, May Tiefenauer, and Alice Clemonds. Faye worked as an inspector for the Alton Glass Company and she was the dispatcher for the Iron County Sheriff's Department for many years. She is a past president of the Silver Bells Chapter of the Red Hat Society in Farmington.

The family of Faye Marie Hurst created this Life Tributes page to make it easy to share your memories.