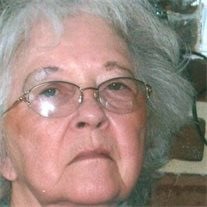 Evelyn Josephine Womack, formerly of Ironton passed away August 10, 2012 in St. Louis, MO at the age of 84 years. Evelyn was born February 3, 1929 a daughter of the late Thomas Aaron and Iva Belle (Propst) Hill. In 2006, Evelyn was united in... View Obituary & Service Information

The family of Mrs. Evelyn Josephine Womack created this Life Tributes page to make it easy to share your memories.

Send flowers to the Womack family.