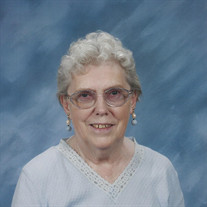 Enid Elnora Ehlert passed away August 14, 2018 in Pilot Knob, Missouri. She was 90 years of age. She was born on April 3, 1928, in Poplar Bluff, Missouri, daughter of the late Walter Oscar and Hattie (Martin) Uebelein. She was united in marriage June 10, 1949, to Alfred William Ehlert, who preceded her in death. Enid is survived by her daughter and son-in-law, Elizabeth Lynn and Clyde Wayne Hughes, of Pilot Knob; her son, Rick William Ehlert (Suni) of St. Louis, MO; a brother-in-law and sister-in-law, Arthur and Marlene Ehlert, of Chesterfield, MO; a nephew Kurt (Sabra) Ehlert of Foristell, MO; a 1st cousin, John (Pat) Uebelein of Poplar Bluff, MO; a 1st cousin Charles (Dorothy) Uebelein of Waterloo, IL and the mother of her grandchildren Judy Ehlert of O’Fallon, MO. She is also survived by two grandchildren, Elisa (Tim) Stiers of O’Fallon, MO and Christopher (Shannon) Ehlert of St. Charles, MO; three beloved step-grandchildren, John (Vicki) Sutton, Dan (Kathy) Sutton, and Cyndi (Joe) Sheehy, all of the St. Louis area, 3 great grandchildren, 7 step-great grandchildren, and a host of other relatives and close friends. Enid was preceded in death by her father Walter Uebelein, her mother, Hattie, step-father Sam Hinson, her brother Wallace O. Uebelein, and her husband Alfred W. Ehlert. She was also preceded in death by her aunts Anna (Amos) Johnson and Hallie (Carl) Rethwisch, who raised her after her parents’ deaths. Enid retired in 1989 after working 28 years for the State of Missouri, Division of Family Services. Enid was a member of the First Baptist Church of Ironton, where she was an active member of the Priscilla Sunday School class and Silver Eagles. Visitation will be held on Saturday, August 18, 2018 from 11:00 a.m. to Noon with funeral services following at 12:00 p.m. at Bryson Funeral Home Chapel with Pastor Keith Huffman officiating. Interment will be in Arcadia Valley Memorial Park. In lieu of flowers memorials may be made to The Baptist Home, 101 Riggs Scott Lane, Ironton, MO 63650. Online condolences may be made to the family at www.brysonfuneralhome.com.

Enid Elnora Ehlert passed away August 14, 2018 in Pilot Knob, Missouri. She was 90 years of age. She was born on April 3, 1928, in Poplar Bluff, Missouri, daughter of the late Walter Oscar and Hattie (Martin) Uebelein. She was united in marriage... View Obituary & Service Information

The family of Enid Elnora Ehlert created this Life Tributes page to make it easy to share your memories.

Send flowers to the Ehlert family.