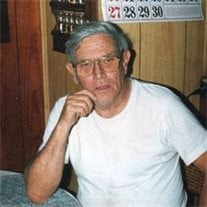 John Edward Bauer of Pilot Knob, MO passed away May 17, 2012 in Desloge, MO at the age of 87 years. He was born September 28, 1924 in LeMay, MO the son of the late John and Ethel (Missey) Bauer. On September 8, 1945 he was united in marriage to Bonnie Viola LaChance who preceded him in death on August 8, 2001. To this union six children were born; Susan and husband Bill Chilton of Oxly, MO, Wilma Hagamann of Desloge, MO, Linda Nordan of Dalton, GA, Diana Lunning of Friendsville, TN, John A. Bauer of Ravanna, OH and Eddie Bauer who preceded him in death. John is also survived by a half brother, David Wilkins, his long time housekeeper and friend, Martha Whited, 18 grandchildren, numerous great grandchildren and a host of other relatives and friends. John was preceded in death by his brother, Donald Bauer and his sister, Marjorie Gibson. John served in the Civil Conservation Corp in the Forestry Division. He was a member of Emmanuel Lutheran Church where he has served as an Elder in the past.

The family of Mr. John Edward Bauer created this Life Tributes page to make it easy to share your memories.