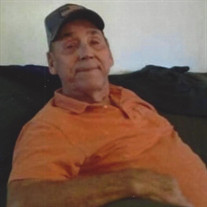 Edsel Odell Savage of Ironton, Missouri passed away December 31, 2020 at his home surrounded by his loving family. He was born January 16, 1941 in Hogan, Missouri the son of the late Carl Odell and Mabel (Brawley) Savage. Edsel is survived by his wife Reba Gaye Hamilton, who he married on December 20, 1980. He is survived by his children, David Savage (Dorothy) of Arcadia, Missouri, Diane Vandergriff (Rick) of Ironton, Missouri, Michael Lowe of Minnesota, Lisa Adams of Leadwood, Missouri, and Adrian Hope Stirts of Ironton, Missouri. Also surviving are three sisters: Connie Brewer of Ironton, Missouri, Belinda Robinson of Coffeyville, Kansas, Shelly Johnson (Wes) of Arcadia, Missouri, four brothers: Mike Savage (Jeanette) of Farmington, Missouri, Harold Savage (Deloris) of Florida, Mark Savage (Sue) of Farmington, Missouri, and Bob Savage (Ruthie) of Ironton, Missouri. Three grandchildren that Edsel and Reba raised are left to mourn: Garrett Adams (Krissy), Skylar Adams (Savanna) and Rebekah Adams (Billy), two sisters-in-law survive: Betty Savage and Chris Savage, twenty-two grandchildren, seventeen great grandchildren, with one more great grandchild on the way as well as a host of nieces, nephews, other relatives and many, many friends. In addition to his parents, Edsel was preceded in death by his daughter, Darla Kay Francis, four brothers: Kevin, Tim, Denny and Charles “Deb” Savage, his sister-in-law, Patricia Savage, and his brother-in-law, Dick Robinson. Edsel worked in the timber industry for many years as a head sawyer and a mill boss. He later worked at Brown Shoe Factory as an assistant Foreman and he finished his working career at the Arcadia Valley Schools. He enjoyed watching ball games on television, telling corny jokes, and tinkering. While carpentry wasn’t his favorite thing, he could fix or build anything. Edsel was a hard worker his entire life. He was not one to sit around. Most of all he loved spending time with his entire family – nothing was more important to him than his family. DUE TO COVID - 19 ALL FAMILY MEMBERS AND GUESTS ARE REQUIRED TO WEAR MASKS WHILE VISITING OUR FACILITY. SOCIAL DISTANCING IS ALSO EXPECTED TO KEEP FAMILY MEMBERS, GUESTS, AND STAFF SAFE. SEATING CAPACITY HAS BEEN REDUCED TO ACCOMODATE FOR SOCIAL DISTANCING. THANK YOU FOR YOUR COOPERATION AND UNDERSTANDING.

Edsel Odell Savage of Ironton, Missouri passed away December 31, 2020 at his home surrounded by his loving family. He was born January 16, 1941 in Hogan, Missouri the son of the late Carl Odell and Mabel (Brawley) Savage. Edsel is survived... View Obituary & Service Information

The family of Edsel Odell Savage created this Life Tributes page to make it easy to share your memories.

Send flowers to the Savage family.