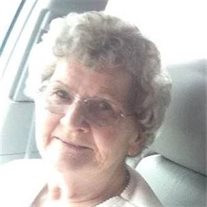 Edna Jane (Tracy) Calvert passed away on February 28, 2016 in Dexter, Missouri at the age of 93 years. She was born on October 29, 1922 in Gordonville, Missouri, the daughter of the late James and Susan (Hurst) Tracy. On February 8, 1941 she was united in marriage to J. Russell Calvert who preceded her in death on February 15, 1988. To this union three children were born: Tommye Dukes and friend Harry Duncan of Dexter, Missouri, Kathy Glaskey and husband Tom of Ironton, Missouri and Rusty Calvert and wife Tess of Arcadia, Missouri. Edna is also survived by four grandchildren: Shannon Burgard, Robin Rickman, Jason Glaskey and Andrea Sept; nine great grandchildren, as well as a host of nieces, nephews, other relatives and many friends. In addition to her parents and husband, Edna was preceded in death by three brothers Thomas, Nathan and James Tracy; five sisters: Ruth Grieshaber, twins Flora and Lora Tracy, Nora Brake, Mary Matan, and Lillian Lollar. Edna graduated from Ironton High School where she was Captain of the Volleyball Team. She was a member of the Arcadia Valley United Methodist Church. Edna was part of the Rosie the Riveter crew working for Curtis Wright Company on air planes during World War II. She enjoyed quilting and watching Saint Louis Cardinals Baseball. Funeral services will be on Wednesday, March 2, 2016 at 12:00 noon from Bryson Funeral Home Chapel with Pastor Marty Blakey officiating. Visitation will be from 10:00 A.M. until the service at noon. Interment will be in the Arcadia Valley Memorial Park. Memorials may be made to Arcadia Valley United Methodist Church, VNA Hospice or Cardinals Care. Online condolences may be made to the family at www.brysonfuneralhome.com

Edna Jane (Tracy) Calvert passed away on February 28, 2016 in Dexter, Missouri at the age of 93 years. She was born on October 29, 1922 in Gordonville, Missouri, the daughter of the late James and Susan (Hurst) Tracy. On February 8, 1941 she... View Obituary & Service Information

The family of Edna Jane Calvert created this Life Tributes page to make it easy to share your memories.

Send flowers to the Calvert family.