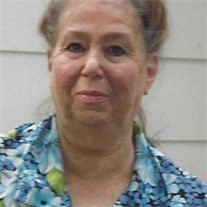 Dorothy Jean Bates of Ironton, MO passed away October 29, 2013 in St. Louis, MO at the age of 73 years. She was born April 12, 1940 in Graniteville, MO to the late Charles Earl and Bertha Viola (McGill) Thomas. On September 15, 1971 she was united in marriage to John Bates who preceded her in death October 12, 2010. Dorothy is survived by two daughters, Beverly and husband Steve Myracle of Ironton, MO and Amy Elizabeth Bates of Pilot Knob, MO. She was preceded in death by a son, John C. Bates. In addition to her daughters, Dorothy is survived by a sister, Ann Queen of Ironton, MO, her mother-in-law, Lorraine Bates, three grandchildren, two great grandchildren as well as a host of nieces, nephews, other relatives and friends. She was preceded in death by a brother, Donnell Thomas and a sister, Virginia Thomas.

The family of Dorothy Jean Bates created this Life Tributes page to make it easy to share your memories.

Send flowers to the Bates family.