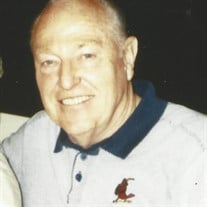 Donald Edward Woodcock of Ironton, Missouri passed away June 16, 2020 in St. Louis, Missouri at the age of 88 years. He was born September 27, 1931 in Leadwood, Missouri the son of the late Otto and Gertrude (Clay) Woodcock. On May 18, 1952 he was united in marriage to Alma Aldine Johnson who survives. To this union six children were born; Donna King of Ironton, Sandra Trask and husband, Steve of Arcadia, Carol Hardy and husband, Mike of Ironton, Linda Bohannon of Arcadia, Lana Durham of Ironton, and Matthew Woodcock and wife, Nancy of San Antonio, Texas. Eleven grandchildren survive; Jeremy (Tiffany), Amber (Lucas), Amie (Josh), Christy (Justin), Jessica (Josh), Jason (Peggy), Andrew, Jonathan (Jade), Emily (Alex), Aubrie (Tyler), and Terry (Paula), fourteen great grandchildren survive; Maggie, Cate, Paige, Lillie, Annabelle, Pippa, William, Avery, Adilynn, Evan, Tyson, Stuart, Camden, Trenton, Justin (Jennifer), Allison (Ryan), Logan and Nathan, and three great great grandchildren; Avery, Madelyn, and Baby Marlee as well as a host of nieces, nephews, other relatives and many, many friends. In addition to his parents, Don was preceded in death by two sons-in-law; Kevin Bohannon and Bill Durham, his brother, Marion Woodcock and five sisters; Arlene Fryman, Christine Culton, Maxine Ribaudo, Armilee Henson, and Imogene Miller. Don was a member of the Ironton Church of the Nazarene, where he faithfully served as a song leader & Sunday School Superintendent for many years. Don loved the Lord, his family, his community, and his country. He served his country as a member of the National Guard from 1947 to 1950. He was the owner of the local State Farm Agency for 48 ½ years. He began serving as an agent in 1967 and retired in January of 2014. He made many many friends while serving his community. Don was a HUGE St. Louis Cardinals fan. This was evident by his passion for the sport and the hundreds of games he attended. A commemorative stone paver, which is dedicated in his name, is located in front of the current Busch Stadium. He enjoyed collecting coins and he loved working with his hands, which included: painting, woodworking, gardening, refinishing furniture, and working a good jigsaw puzzle. He was a master storyteller and he loved to tell jokes. As he got older, his jokes may have gotten more and more corny, but it still never prevented him from telling them. In lieu of flowers, donations may be made to the children’s charity, Cardinals Care: https://www.mlb.com/cardinals/community/donate-to-cardinals-care. Memorials may also be made to the American Cancer Society or the American Diabetes Association.

Donald Edward Woodcock of Ironton, Missouri passed away June 16, 2020 in St. Louis, Missouri at the age of 88 years. He was born September 27, 1931 in Leadwood, Missouri the son of the late Otto and Gertrude (Clay) Woodcock. On May 18, 1952... View Obituary & Service Information

The family of Donald Edward Woodcock created this Life Tributes page to make it easy to share your memories.

Send flowers to the Woodcock family.