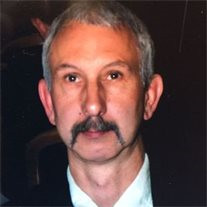 Donald Gary Thompson of Belleview, MO passed away April 8, 2016 in Des Peres, Missouri at the age of 64 years. He was born September 16, 1951 the son of the late Wilburn A. Thompson and Reba L. (Jaycox) Winters. On September 19, 1970 he was united in marriage to Cathy Ann DePriest who survives. To this union three children were born; Christopher Thompson of Gillette, Wyoming, Paula Thompson of Graniteville, Missouri and Pamela Hand who preceded him in death. Donnie is also survived by a brother, Peter S. Thompson of Belleville, Illinois and a sister, Sandra C. Thompson of Pilot Knob, Missouri, seven grandchildren; Amber, Breezy, Anthony, Freeman, Joshua, Shea and Caleb, and two great grandchildren; Melia and Jordan, as well as a host of other relatives and friends. In addition to his parents, Donnie was preceded in death by his daughter, Pam Hand, a brother, Douglas A. Thompson, and a sister, Janet R. Thompson. Donnie attended Belleview Methodist Church. He enjoyed hunting, walking in the woods, and especially spending time with and playing with his grandchildren. Memorials may be made to the American Cancer Society.

The family of Donald Gary Thompson created this Life Tributes page to make it easy to share your memories.