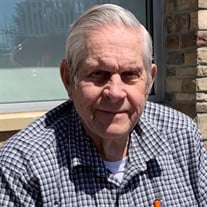 David Mayes, born January 15, 1939, a lifelong resident of Ironton, Missouri, passed away July 28, 2021, at the age of 82, surrounded by his family. David is survived by his wife, Joyce Mayes (née Chronister); and his children Nancy (Ronnie) LaChance and Jimmy (Michele) Mayes. He is also survived by nine grandchildren: Brandi LaChance of Ironton, Brittany LaChance of Ironton, Krista Smallen of Fredericktown, Bradley Mayes of Desloge, Frank Mayes of Doe Run, Wesley Mayes of Ironton, Aaron Brill of Marshall, Bailey Brill of St. Louis, and Bryan Brill of Cabool, nine great grandchildren as well as a host of nieces, nephews, other relatives, and friends. David was preceded in death by his parents; Odia and Ella Mayes, his brother Jack (Alta) Mayes, and a special aunt and uncle, Tom, and Elizabeth Mayes. David was a devoted husband, loving father and grandfather and an active member of his community. He started working at age nine and was never without a job until he retired at the age of sixty-five. David was a lifelong member of the Arcadia Valley United Methodist Church. He was a member of the Ironton Fire Department for twenty-five years, twenty-three of which he served as the Fire Chief. He spent ten years at the Ironton Brown Shoe factory and twenty-five years as a telephone man. After retiring from the phone company, David devoted ten years to maintaining the beauty of the local State Parks. He enjoyed hunting, fishing, and riding his motorcycle with his dog, Romeo. David will be greatly missed, and his memory will be cherished by his family forever. Memorials may be made to the Alzheimer's Association.

David Mayes, born January 15, 1939, a lifelong resident of Ironton, Missouri, passed away July 28, 2021, at the age of 82, surrounded by his family. David is survived by his wife, Joyce Mayes (née Chronister); and his children Nancy (Ronnie)... View Obituary & Service Information

The family of David Thomas Mayes created this Life Tributes page to make it easy to share your memories.

Send flowers to the Mayes family.