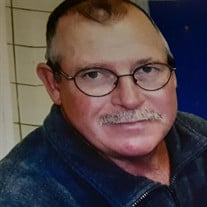 David Bradley Inman known to most as “Brad” passed away on May 11, 2021 at the age of 66 surrounded by his family. He was born on July 17, 1954 in Ironton, Missouri to the late Woodrow and Myrtle (Mayberry) Inman. On August 29, 1999 he was united in marriage to Donna (Chappell) Inman who survives and resides in their home in Ironton, Missouri. Brad is survived by his stepdaughters: Sara Chappell (Jerry Williams); Liza Chappell (Shaun Smith) both of Ironton, Missouri; His four grandsons: Logan and Christopher Williams, Hunter, and Kolten Smith. Brad is also survived by his daughters: Dacia (Scott) Ryon, Deborah Fisher (and her children) of Missouri; Sarah Casteel of Irondale, Missouri and her three children, Shaylin, Allyssa, Emmery Jones. Brad is also survived by five brothers: Jerry (Carol) Inman, Jake (Brenda) Inman, Kelly (Nancy) Inman, Tim (Lisa) Inman all of Ironton, Missouri. Two sisters survive: Melba (Bud) Stirts , Lucille (Jerry) Hughes both of Pilot Knob, Missouri; as well as a host of nieces, nephews, other relatives, and friends. Preceding Brad in death are his parents, two brothers, Robert and Carl Inman, one infant grandson, Landen Williams. Brad served our country in the United States Army. He worked as a tree trimmer for most of his life. He enjoyed fishing and spending time with his grandsons. In Brad’s memory, we ask that you welcome home and say a thank you to the men and women who proudly served our country.

The family of David Bradley Inman created this Life Tributes page to make it easy to share your memories.

David Bradley Inman known to most as “Brad” passed away on May...

Send flowers to the Inman family.