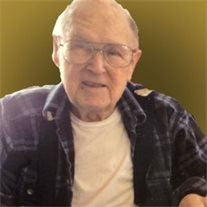 David L. Akins Jr. of Pilot Knob, Missouri passed away December 15, 2017 at his residence at the age of 90 years. He was born June 24, 1927 in Annapolis, Missouri the son of the late David L . and Zora (Vance) Akins. On August 18, 1944 he was united in marriage to Orpha Mariam Vogler who preceded him in death on March 1, 2008. To this union four children were born; Burlan Akins of St. Louis, Missouri, David Akins of Chowchilla, California, Rodney Akins of Cottage Hills, Illinois, and Tammy Fishbeck of Arcadia, Missouri. In addition to his parents, David was preceded in death by his son, Rodney Akins, three brothers; Burlan Akins, Vernon Akins, and William Thomas "Pete" Akins, and his sister and brother-in-law; Mida and Dent Bartlow. David was grandfather to eleven grandchildren and numerous great grandchildren. He was an uncle as well. David was a salesman of every kind – cars, vacuums, real estate. He loved Buy, Sell or Trade and going to auctions, flea markets, and garage sales. He also enjoyed fishing and was "always in search of a million dollars".

The family of David Laffayette Akins created this Life Tributes page to make it easy to share your memories.

Send flowers to the Akins family.