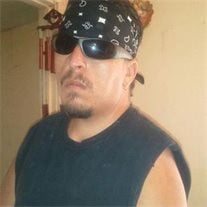 Darrell Edward Keith Sr. of Bismarck, Missouri passed away March 17, 2015 in Farmington, Missouri at the age of 39 years. He was born on August 30, 1975, the son of Dennis Keith of Bismarck Missouri, and Norma Perez and fiancé Jim Prichard of Saint Louis, Missouri. Darrell is survived by his son, Darrell Keith Jr.; his brothers James Thompson of Bismarck, Missouri, Joseph and wife Debbra Keith of Fredericktown, Missouri, and Daniel Keith Sr. and fiancé, Kelly Devine of Iron Mountain Lake, Missouri; his sisters Maria Keith and fiancé Kevin Brewer and Christina Keith of Bismarck, Missouri; his nephews Coty Propst, Adam Propst, Daniel Keith Jr., Dalton Dollahite, Michael Pender, Kobe Barton, Brad Roberts, and Devin Steinmetz; his nieces Destiny Tittle, Danielle O'Neal, Erica Thompson, Amanda and Kacey Brewer, Britney and Lilliyian Keith, and MaKayla and Emmilou Barton as well as a host of other relatives and friends. Darrell is preceded in death by his sister Debbie Lynn Thompson, his grandparents Delmar and Ruth Keith, his aunt Joyce Bonds, and his favorite uncle James Moyer; his nieces Micah Palencia, Isabella Palencia, Mary Lou Ely, Lexi, Hailie, and Olivia Ely; his nephews Alex and Andi Keith, Kori Keith, Tristian Keith, Stevie Ray Ely, Dennis Ray Keith, and Ivan Daniel Keith. Darrell was a great father, brother, son, nephew and friend to all who knew him. He liked to fish and hunt, and to joke around with his friends. His most favorite thing to do was spend time taking care of his son. He knew everyone, and everyone knew who he was, the kind of person who would help anyone if he could. Darrell will truly be missed by all who knew and loved him.

Darrell Edward Keith Sr. of Bismarck, Missouri passed away March 17, 2015 in Farmington, Missouri at the age of 39 years. He was born on August 30, 1975, the son of Dennis Keith of Bismarck Missouri, and Norma Perez and fiancé Jim Prichard of... View Obituary & Service Information

The family of Darrell Edward Keith created this Life Tributes page to make it easy to share your memories.

Send flowers to the Keith family.