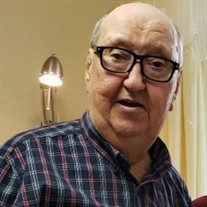 Curtis Wayne Miller of Louisiana, Missouri passed away September 28, 2019 at Parkside Manor in Bowling Green, Missouri at the age of 81 years, 8 months, and 7 days. He was born January 21, 1938 in Minimum, Missouri the son of the late James Clay and Myrtle (King) Miller. Curtis is survived by his daughter, Cynthia Sobus and her spouse, Patricia of Naperville, Illinois, two brothers; James “Clinton” Miller and wife, Elsie of California, Missouri, Gerald Miller and wife, Ashley of Pensacola, Florida, two sisters; Mary Ellen Settle and husband, Robert of Bonne Terre, Missouri, and Sharon Pinkley of St. Peters, Missouri, one granddaughter; Elizabeth Hays and husband Curtis, and his great granddaughter; Amira Lucille. Also surviving are his stepchildren; Helen Hurlock, Terri Stewart and husband, Kevin, Wendy Butler and husband, Jim, Jody Sparks and husband Philip, Dale Hurlock, Valorie Stewart and husband, Kenny, Tina Lawrence and husband, Michael, grandchildren, great grandchildren, as well as nieces, nephews, other relatives and friends. Curtis was preceded in death by two sisters and their husbands; Shirley and Don Lewis and Elizabeth “Bernice” and Jack Pollock, and his brother-in-law, William “Daniel” Pinkley. Curtis was a 1956 graduate of Fredericktown High School. He worked as the Plant Superintendent for Brown Shoe Company for several years until moving the family to take a position in St. Louis. He worked in Texas and Kansas and then came back to Missouri where he retired from Tamor Plastics in Louisiana, Missouri. Following his retirement, Curtis drove the bus for the Head Start and he participated in the foster grandparents program. Curtis most recently attended the Cowboy Church in Bowling Green. He enjoyed woodworking, tending to his flower gardens, feeding the birds and squirrels, and fishing. He also enjoyed singing and sang with several gospel groups over the years. He also was a songwriter. Funeral services will be held on Saturday, October 5, 2019 at 12:30 p.m. from Bryson Funeral Home Chapel with Pastor Harold Canup Jr. officiating. Visitation will begin at 10:30 a.m. prior to the service. Interment will be in Polk Cemetery at a later date. Memorials may be made to the American Cancer Society. Online condolences may be made to the family at www.brysonfuneralhome.com.

Curtis Wayne Miller of Louisiana, Missouri passed away September 28, 2019 at Parkside Manor in Bowling Green, Missouri at the age of 81 years, 8 months, and 7 days. He was born January 21, 1938 in Minimum, Missouri the son of the late James... View Obituary & Service Information

The family of Curtis Wayne Miller created this Life Tributes page to make it easy to share your memories.

Send flowers to the Miller family.