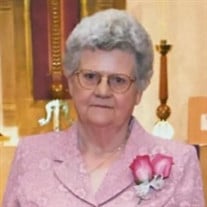 Clydia Avis (Shriver) Powers of Lesterville, Missouri passed away on January 10, 2021, at the age of 91 years. She was born on July 15, 1929 in Centerville, Missouri, the daughter of the late Clifford and Bernice (Gallahar) Shriver. On October 11, 1947, Clydia was united in marriage to Elmer Ray Powers, who preceded her in death on February 13, 1996. To this union, two children were born: Kenneth Ray Powers (Robb Endicott-Powers) of St. Louis, Missouri, and the late Richard Lee Powers (Cathy). In addition to her son, Clydia is survived by one brother, Larry Shriver of Fort Worth, Texas; six grandchildren, and six great grandchildren; as well as a host of nieces, nephews, other relatives, and friends. She was preceded in death by two brothers: Robert Shriver and Irvin Shriver. Clydia became a Christian and was baptized at the young age of 9 years old during a revival at the First Baptist Church of Ironton. She was a member of The First Baptist Church of Lesterville at the time of her death. Before retiring to Lesterville she served a previous congregation in St. Louis as the church Treasurer and taught Sunday School. Her entire life she has been a dedicated Prayer Warrior. During her working years, she was employed as a registrar for the Department of Revenue in St. Louis. Clydia loved flowers, particularly African Violets. She grew African Violets and thru her love of these flowers she met many people throughout the world. This network of friends developed into life-long pen pal relationships. Clydia was a die-hard Cardinals fan and an avid reader. She also enjoyed cooking and baking, helping others and spending time with her family. A private service was held on Friday, January 15, 2021 at Bryson Funeral Home with Pastor Bill Jackson officiating. Interment followed the services at Arcadia Valley Memorial Park. Memorials may be made to the Gideons International. Online condolences may be made to the family at www.brysonfuneralhome.com.

Clydia Avis (Shriver) Powers of Lesterville, Missouri passed away on January 10, 2021, at the age of 91 years. She was born on July 15, 1929 in Centerville, Missouri, the daughter of the late Clifford and Bernice (Gallahar) Shriver. On October... View Obituary & Service Information

The family of Clydia Avis Powers created this Life Tributes page to make it easy to share your memories.

Send flowers to the Powers family.