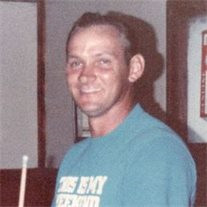 Charles R. Jones, known to most as Chuck, passed away August 26, 2012 at the age of 64 years. He was born May 12, 1948 in Middle Brook, MO the son of the late John Franklin and Anna (Hurt) Jones. On April 6, 1968 he was united in marriage to Judy Marie Boyer who survives. To this union three children were born; Deirdre Sue Jones of Arcadia, MO, Carl and wife Jonnie Jones of Fredericktown, MO, and Kenny Jones of Arcadia, MO. Also surviving are two brothers; Clifford Jones of Fredericktown, MO, Jewell Jones of Dittmer, MO, a sister, Gwen Jones of Fredericktown, MO, three grandchildren; Derek, Robert, and Alexander as well as a host of nieces, nephews, other relatives, and many, many friends. Chuck was preceded in death by a brother, Carl Jones, and four sisters; Betty Mathis, Ilene McClure, Pauline Mathis, and Doris Bone. Chuck worked for the Missouri Pacific Railroad and later Union Pacific Railroad as a Foreman for many years. He was a member of the Arcadia Valley Eagles and the Arcadia Valley Elks Lodge.

The family of Mr. Chuck R. Jones created this Life Tributes page to make it easy to share your memories.

Charles R. Jones, known to most as Chuck, passed away August...