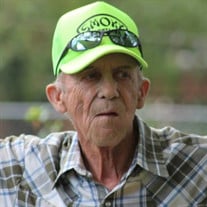 Charles Delmar Savage, known to everyone as “Deb”, passed away December 14, 2019 in Pilot Knob, Missouri at the age of 76 years. He was born January 6, 1943 in Hogan, Missouri the son of the late Carl Odell and Mabel (Brawley) Savage. On July 27, 1963 he was united in marriage to Betty Ruth Sullivan who survives and resides in Bismarck, Missouri. To this union three children were born; Debbie Savage Tripp and husband, Rob of Pilot Knob, Missouri, Charlie Savage of Annapolis, Missouri, and Carla Savage Craig and husband, Mark of Bismarck, Missouri. Deb is also survived by five grandchildren and eight great grandchildren. Five brothers survive; Edsel Savage and wife Reba of Ironton, Mike Savage and wife, Jeanette of Farmington, Harold Savage and wife, Deloris of Florida, Mark Savage and wife, Sue of Farmington, and Bob Savage and wife, Ruthie of Ironton, and three sisters survive; Connie Brewer of Ironton, Belinda Robinson and husband, Dick of Coffeeville, Kansas and Shelly Johnson and husband, Wes of Arcadia, Missouri. Also surviving are special friends; Mike and Shelia Lucy and Mark and Lana Conner. Deb was preceded in death by three brothers; Kevin Savage, Tim Savage and Denny Savage and his sister-in-law, Patricia Savage. Deb was a member of Local 916 Labor Union. He worked in construction for many years and worked on building Taum Sauk in the 1960’s and later the Pilot Knob Pellet Company. The last 19 years of his employment he worked as a truck driver for Politte Ready Mix Cement Company. More than anything else Deb liked to help others and spend time with his family. Deb was a friend to many, stranger to none, and helper to all.

The family of Charles "Deb" Savage created this Life Tributes page to make it easy to share your memories.

Charles Delmar Savage, known to everyone as “Deb”, passed away...

Send flowers to the Savage family.