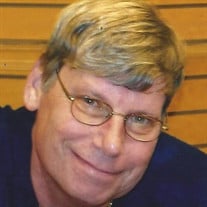 Charles Robert Hutson II, known to most as “Bob” passed away on April 3, 2019 at his residence in Arcadia, Missouri at the age of 67 years. He was born August 5, 1951 in Evansville, Indiana the son of the late Charles Robert and Betty June (Halcomb) Hutson. On June 21, 1980 Bob was united in marriage to Alta Marie Gay who preceded him in death on March 31, 2019. He is survived by his brother, Bruce Hutson and wife, Tonya of Poplar Bluff, Missouri, his nieces, Melissa Burgan, Sara Allegree and Amber Edgy, nephews; Toby Gray, Jonathan Gray, and Adam Hutson and great nieces and nephews; Devon, Taylor, Ashley, Nate, Trevor, Damian, Connor, Carson, Savannah, Addison and Drake as well as a host of other relatives and friends. Bob was preceded in death by his nephew, Ryan Hutson. Bob was 1970 graduate of Galesburg Senior High in Galesburg, Illinois and he earned his Bachelor of Science in Physical Education from Monmouth University. Bob worked as a Manager for Walmart until he retired. He loved to read, watch movies, go to concerts and amusement parks where he loved the roller coasters. In his younger years he enjoyed scuba diving, swimming and playing tennis.

The family of Charles Robert "Bob" Hutson created this Life Tributes page to make it easy to share your memories.

Charles Robert Hutson II, known to most as “Bob” passed away...

Send flowers to the Hutson family.