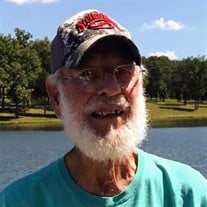 Charles Laverne Hamilton, known to most as “Vern” passed away on March 27, 2021 at Jefferson Mercy Hospital at the age of 78 years. He was born April 30, 1942 in Annapolis, Missouri the son of the late Dallas and Nellie (Jones) Hamilton. On April 29, 1977 he was united in marriage to Judith Ann Harmon who preceded him in death on August 27, 2016. Vern is survived by eight children: Kenny Hamilton of Dittmer, Missouri, Lisa Alexander (Kenny) of Dittmer, Missouri, Darlis Moore (Mark) of Bloomsdale, Missouri, Vernon Hamilton (Lisa) of DeSoto, Missouri, Troy Harmon of Bonne Terre, Missouri, Steve Hamilton (Beth) of Hillsboro, Missouri, Joe Hamilton (fiancé Kaila Hancock) of Pevely, Missouri, and Amy Straskulic (Robert) of Leadington, Missouri. Also surviving are his brother: Drew Hamilton of Annapolis, Missouri, and his sister: Louise Toppins of Annapolis, Missouri, fourteen grandchildren, seven great grandchildren, as well as a host of nieces, nephews, other relatives, and many friends. In addition to his wife and parents, Vern was preceded in death by his brother: Homer “Peck” Hamilton and two sisters: Karion Sutton and Sylvia Propst. Vern graduated from Annapolis High School in 1960. He worked as a delivery driver for Home Service Oil Company for several years until he retired. He enjoyed fishing, hunting, woodworking, he loved bluegrass music and playing the guitar. Vern loved to play horseshoes and bar-b-que with his family. Due to COVID - 19, all family members and guests are required to wear a mask or facial covering while visiting our facility. Social distancing is also expected to keep family members and staff safe. Seating capacity has been reduced to accommodate social distancing. Thank you for your cooperation and understanding.

The family of Charles "Vern" Hamilton created this Life Tributes page to make it easy to share your memories.

Charles Laverne Hamilton, known to most as “Vern” passed away...

Send flowers to the Hamilton family.