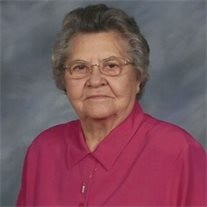 Eulene Lancaster was the daughter of Freeman and Cora (Hayes) Carver. She was born on April 10, 1925 in Slayden, Tennessee. Her siblings consisted of Lloyd Carver, Larry Carver, Jake Carver Virginia McKinney, Jeannette Clemons, Sue Mader and Georgia Counts who survive and Tommy Carver, J.W. Carver, Jimmy Carver, Mary Lee Wall and Annabelle Street who preceded her in death. While working in Clarksville, Tennessee, she met her sweetheart Tony Dewey Lancaster. They were united in marriage on September 14, 1946 and he preceded her in death on December 14, 2006. Eulene and Tony were blessed with one son, Jimmy Dale (who passed away at the age of 10 months), and four daughters Linda and husband Kenneth Carty, Sandy and husband Darwin Camden, Connie and husband Billie Hester, and Judy Lancaster and special friend Taras Matviyeshyn. They have five grandchildren; Deanna Carty-Hubert, Dana Turner, Heath Camden, Brock Hester, and Blair Hester and four great grandchildren; Victoria, Tyson, Jade, and Rowan who she loved dearly. Eulene had accepted Christ and was a member of the Arcadia Valley Church of Christ. She sewed in a factory to assist in the World War II effort prior to meeting Tony. She then babysat for many teacher's children. Eulene worked as head cook for over 20 years at Black River Lodge in Lesterville, Missouri prior to retiring.

The family of Carrie Eulene Lancaster created this Life Tributes page to make it easy to share your memories.

Eulene Lancaster was the daughter of Freeman and Cora (Hayes)...