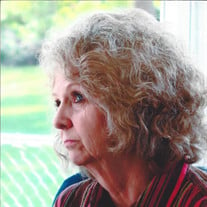 Carol Ann Likely was born November 14, 1946 in Graniteville, Missouri the daughter of the late Edward and Alma (Carty) Keenan. She passed away on January 8, 2022 in Ironton, Missouri at the Baptist Home at the age of 75 years. On November 21, 1970 she was united in marriage to David B. Likely Sr. To this union two children were born: David Likely Jr. who preceded her in death and Shelly Ketcherside (Mark) of Coffman, Missouri. Carol’s employment evolved beginning at Short’s store, Arcadia Valley Hospital, and ending with 27 years of service at The Baptist Home. Carol was naturally quiet; although folks who knew her well would tend to disagree with that notion. She loved to sing, cut up, laugh, and enjoy life in general. She took pride in her family, friends, work, and home. She enjoyed sightseeing, traveling in all continental forty-eight states, and some of Canada. Carol also enjoyed auto racing. She spoiled many with her cakes, butterhorn rolls, fried chicken, and Bear burgers. In addition to her parents and son, Carol was preceded in death by her brothers: Charlie (Marie) Keenan, Andy Keenan, Marion Keenan, Marvin Keenan, and Clyde Keenan and her sisters: Lena Johnston (Glenwood), Joyce Keenan, Maxine Price, and Jean Niethe (Bill). Carol is survived by her brothers: Ronnie Keenan (Mary) of Cedar Hill, Missouri, and Bobby Keenan of Belgrade, Missouri, her sisters-in-law: Thelma Keenan, Elaine Keenan and Peggy Keenan, Diana Likely of Crestwood, Missouri, Joan Ray (Steve) of Enterprise, Alabama, and Leslie Swank (David) of Cedar City, Utah, and her brother-in-law: Jim Price of Missouri. Carol is also survived by four granddaughters, two great grandchildren as well as a host of nieces, nephews, other relatives, and friends. Funeral services will be held on Friday, January 14, 2022 at 11:00 a.m. from Bryson Funeral Home with Pastor Lois Yates and Pastor Jim Wills officiating. Visitation will be on Thursday evening from 5:00 p.m. until 8:00 p.m. Interment will be in Arcadia Valley Memorial Park. Memorials may be made to The Baptist Home or the Alzheimer’s Association.

Carol Ann Likely was born November 14, 1946 in Graniteville, Missouri the daughter of the late Edward and Alma (Carty) Keenan. She passed away on January 8, 2022 in Ironton, Missouri at the Baptist Home at the age of 75 years. On November... View Obituary & Service Information

The family of Carol Ann Likely created this Life Tributes page to make it easy to share your memories.

Send flowers to the Likely family.