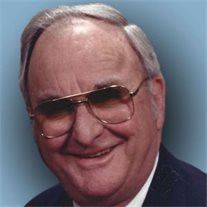 C.W. "Bill" Jackson of Pilot Knob, Missouri passed away March 23, 2017 at the age of 93 years. He was born October 30, 1923 in Fredericktown, Missouri the son of the late William Lee and Nora (Sanders) Jackson. On September 19, 1947 he was united in marriage to Geneva B. Crawford who preceded him in death on April 3, 2015. To this union two children were born; Charles Jackson and wife, Tonnie of Pilot Knob, Missouri and Sue Reagan and husband, Wayne of Pilot Knob, Missouri. In addition to his children Bill is survived by three grandchildren; Kim Dement and husband, Nathan, Kellee Dement and husband, Chris, and Bradley C. Jackson and wife, Maggie, five great grandchildren; Karson Dement, Maddie Dement, Jackson Dement, Connor Jackson and Kate Jackson, as well as a host of nieces, nephews, other relatives and friends. Bill was preceded in death by six brothers; Cy Jackson, Paul Jackson, Roy Jackson, George Jackson, Edgar Jackson, and Sonny Jackson and three sisters; Hazel Kelley, Goldie Chilton and Lela Jackson. Bill was a member of the Iron Mountain First Baptist Church. He was a graduate of Lesterville High School. He served his country in the United States Marines during World War II from 1943 to 1946. Bill was a member of the Hopewell Lodge #239 AF & AM in Lesterville, he served as treasurer of the Lesterville School Board, treasurer of the Lesterville Water Works and secretary of the Dent County Bank Advisory Board. Bill and his wife Geneva owned Jackson Jeep in Lesterville for 20 years.

The family of C. W. "Bill" Jackson created this Life Tributes page to make it easy to share your memories.