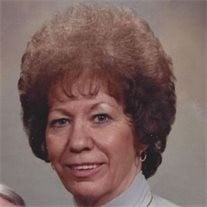 Geneva Blanche Jackson of Pilot Knob, MO passed away April 3, 2015 in Festus, Missouri at the age of 84 years. She was born August 2, 1930 in St. Louis, Missouri the daughter of Everette and Leona (Graves) Crawford. On September 19, 1947 she was united in marriage to Charles Willard Jackson Sr who survives. To this union two children were born; Charles Jackson Jr and wife, Tonnie of Pilot Knob, Missouri and Sue Reagan and husband, Wayne, also of Pilot Knob, Missouri. In addition to her children, Geneva is survived by three brothers; Harold Crawford and wife Joan of Farmington, Missouri, Joey Crawford and wife Cindy of Libertyville, Missouri and Dennis Crawford and wife Judy of Doe Run, Missouri, four sisters; Juanita Lombard of Arnold, Missouri, Joan Sutton and husband Cecil of Ironton, Missouri, Jeanne Rosa of Farmington, Missouri and Peggy Crawford also of Farmington, Missouri. Also surviving are three grandchildren; Kim DeMent and husband Nathan, Kellee DeMent and husband Chris and Brad Jackson and wife Maggie, five great grandchildren; Karson DeMent, Maddie DeMent, Jackson DeMent, Connor Jackson, and Kate Jackson as well as a host of nieces, nephews, other relatives and friends. Geneva was preceded in death by two brothers-in-law, Bob Lombard and Doyle Rosa. Geneva was a member of the Iron Mountain Baptist Church. She was also a member of the Order of the Eastern Star. Geneva was an excellent cook and homemaker. Her home was a home to everyone. She was a great storyteller who had a tremendous sense of humor. Her family was very special to her. She went above and beyond to care for them and she was very protective of them all. She will be missed by all who knew her.

Geneva Blanche Jackson of Pilot Knob, MO passed away April 3, 2015 in Festus, Missouri at the age of 84 years. She was born August 2, 1930 in St. Louis, Missouri the daughter of Everette and Leona (Graves) Crawford. On September 19, 1947 she... View Obituary & Service Information

The family of Geneva Blanche Jackson created this Life Tributes page to make it easy to share your memories.

Send flowers to the Jackson family.