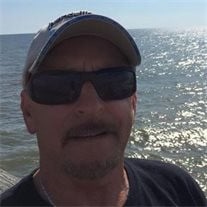 William Henry Coleman, known to most as Bill, passed away November 16, 2016 in Tennessee at the age of 59 years. He was born February 27, 1957 in Ironton, Missouri the son of Earl and Hilda (Mallow) Coleman. On May 22, 1993 he was united in marriage to Elizabeth Faye Racer who survives. Bill is also survived by three children; Shane Helms of Middlebrook, Missouri, Amanda Helms of Middlebrook, Missouri, and Matthew Helms and wife, Deanna of Belleview, Missouri. Other survivors include three brothers; John and wife Alice Coleman of Potosi, Missouri, Robert and wife, Janet Coleman of Potosi, Missouri, Charles and wife Sharon Coleman of Springfield, Missouri, his sister, Charlene and husband Carly Coleman of Potosi, Missouri, his sister-in-law, Cathy Thompson of Graniteville, Missouri, his brothers-in-law; Dennis and wife Shirley DePriest of Hermann, Missouri, and Bill Racer of Belleview, Missouri. He also has six surviving grandchildren; Blake, Avery, Sidnee, Kaden, Bryleigh, and Penelope. Bill was preceded in death by his brother-in-law, Donnie Thompson. Bill was a member of the St. James Catholic Church in Potosi, Missouri. He also belonged to the National Rifle Association. He worked as a Foreman to Northstar Demolition and Reclamation.

The family of Bill Coleman created this Life Tributes page to make it easy to share your memories.

William Henry Coleman, known to most as Bill, passed away November...

Send flowers to the Coleman family.