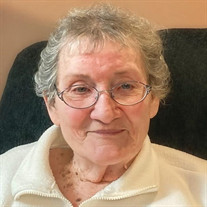 Betty Lou Crocker Russell formerly of Belleview, Missouri passed away January 28, 2022, at the age of 80 years. She was born July 14, 1941 in Enough, Missouri, the only child of the late Robert and Nora (Faulkner) Crocker. Betty was diagnosed with Alzheimer’s and spent her final few years living at The Baptist Home in Ozark, Missouri. Betty was married to the late Laurence Emory Russell of Belleview, Missouri for over 30 years prior to their amicable parting. Together they raised four children and were preceded in death by their son, Laurence Emory Russell Jr. Surviving family includes her children Janet (Russell) and Kevin Gasper of Ozark, MO, Susan (Russell) and Pat Bryan of Purdy, MO, Jim Russell of Belleview, MO, Donna (Russell) and James Murphy of Brookline, MO. Other loved ones include her grandchildren Jenny & Tim, Brian & Ashley, Caty, David, Devin, Ashlee, Travis, Amanda, Joshua and Zachary, 12 great grandchildren, Angie Russell whom she considered her daughter, brother-in-law Gale Going and many nieces and nephews. Betty became a Christian as a young child and always encouraged her children and grandchildren to attend church and trust in Jesus also. She was a long-time member and former pianist/ organist of the First Baptist Church of Belleview. As an only child raised by her grandparents, Betty was thrilled to marry into a large family that welcomed her with open arms and loved her as one of their own. She always credited her mother-in-law with teaching her how to cook, raise a garden, can and freeze the harvest, and many other life skills. Betty was always excited to learn new things and valued education. As a young wife and mother, she chose to attend classes to become first an LPN then eventually an RN, taking evening classes at the community college while working days or weekends. She loved nursing and enjoyed her 35+ year career in various positions at St. Mary’s Hospital, Arcadia Valley Hospital, Iron County Health Department, Farmington State Hospital, The Baptist Home and various other nursing homes. Her most enjoyable years were spent working with the geriatric and Alzheimer’s patients. Betty’s great love of learning and love for music combined into a passion to learn to play many different musical instruments including the piano, organ, accordion, harmonica, banjo, and guitar. She wanted to learn the mandolin as well but never quite got around to it. She could read music as well as play by ear and was the church pianist/ organist beginning as an elementary aged child until well into her adult years. She developed quite a collection of gospel hymns tucked away in her head. If someone could sing a short phrase of a hymn, she could usually recognize it and join in on the piano or organ. Even after having Alzheimer’s for several years, she was still able to sing the words to many hymns from memory. Throughout her life, Betty was an avid gardener and enjoyed reading, quilting, sewing, crocheting, cross-stitching and other crafts. She was a 4-H leader for many years. After retirement she volunteered hundreds of hours for Hospice. Betty’s visitation will be held on Tuesday, February 1, 2022, from 11:30 a.m. until 1:00 p.m. at Bryson Funeral Home Chapel with a brief service following the visitation. Interment will be in the Caledonia Methodist Cemetery. Memorials may be made to the Alzheimer’s Association or St. Jude Children’s Research Hospital.

Betty Lou Crocker Russell formerly of Belleview, Missouri passed away January 28, 2022, at the age of 80 years. She was born July 14, 1941 in Enough, Missouri, the only child of the late Robert and Nora (Faulkner) Crocker. Betty was diagnosed... View Obituary & Service Information

The family of Betty Lou Russell created this Life Tributes page to make it easy to share your memories.

Send flowers to the Russell family.