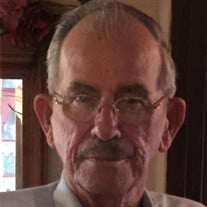 Benjamin Amos Will of Belleview, Missouri passed away January 6, 2020 at Jefferson Mercy Hospital having reached the age of 80 years 11 months and 1 day. He was born February 5, 1939 in East St. Louis, Illinois the son of the late Freeman and Lorena (Ryffel) Will. On December 9, 1960 he was united in marriage to Anna Maud (Latham) Will. They shared 59 years together and three children were born to this union. Ben is survived by his wife, Anna Maude (Latham) Will of Belleview, MO, three children; Sheri Will of Belleview, Mark Will and wife, Catherine of Belgrade, Missouri and Freeman Will of Belleview, a sister; Phyllis Schunk of Stanley, Wisconsin, sister-in-law Shirley Harrell of O’Fallon, Missouri, brother-in-law, Don Latham and wife, Alice of Sikeston, Missouri, brother-in-law John Latham and wife, Velva of Cape Girardeau, Missouri, brother-in-law Charles “Bud” Latham and wife, Karen of Bismarck, Missouri, and four grandchildren; Cara Will, Nicolas Will, Shianna Will, and Justin Will, special friend and caregiver, Barbara Bays of Belleview, Missouri as well as a host of nieces, nephews, other relatives and friends. In addition to his parents, Ben was preceded in death by one sister, Patty Kube. Ben was a graduate of Hancock High School class of 1957 in Lemay, Missouri. He was drafted in 1961 and proudly served his country in the United States Army. Having reached the rank of Corporal with the 317th Combat Engineers. Ben worked at General Motors Parts Plant in Hazelwood, Missouri for 34 years, he retired in January 1999. He was a proud Union member of the Local 25. Graveside services will be held on Thursday, January 9, 2020 at 11:00 a.m. at The Ottery Cemetery with Rev. Harvey W. Buckley officiating. Serving as pallbearers Mark Will, Freeman Will, Nicolas Will, Justin Will, Marshall Latham, CJ Jaycox, and David Haddox. Serving as honorary pallbearers Kevin Harrell, Paul Becker, and Eli Cain. Full military honors will follow the service. Memorials may be made to St. Jude Children’s Research Hospital.

Benjamin Amos Will of Belleview, Missouri passed away January 6, 2020 at Jefferson Mercy Hospital having reached the age of 80 years 11 months and 1 day. He was born February 5, 1939 in East St. Louis, Illinois the son of the late Freeman and... View Obituary & Service Information

The family of Benjamin Amos Will created this Life Tributes page to make it easy to share your memories.

Benjamin Amos Will of Belleview, Missouri passed away January...

Send flowers to the Will family.