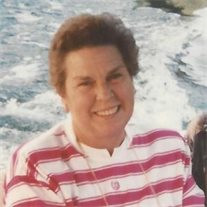 Aurellia Ann Thompson of Annapolis, MO passed away February 20, 2015 in Piedmont, MO at the age of 77 years. She was born July 17, 1937 in Coffeyville, KS the daughter of John Joseph "Hann" and Frances (Kimes) Miller. On July 26, 1962 she was united in marriage to Bert Wilson Thompson who preceded her in death on March 21, 2004. To this union one son was born; Jace Jason Thompson who preceded her in death. She was also preceded in death by her brother John Joseph "JJ" Miller Jr. and her sister, Mary Francis Morris. Aurellia is survived by her daughter-in-law, Janell Thompson of Perryville, MO, her step son Brett Thompson of Katy, TX, a brother-in-law, Jim Morris of Coffeeville, Kansas, two special friends, Nancy Mills of Annapolis, MO and Georgia Alcorn of Des Arc, MO and Tommi Joe who she treated as her granddaughter. She is also survived by her step-grandsons Ryan Thompson and Jason Moll, a step-great granddaughter Makayla Moll, a step-great grandson Devin Moll and a host of nieces, nephews, other relatives and friends.

The family of Aurellia Ann Thompson created this Life Tributes page to make it easy to share your memories.