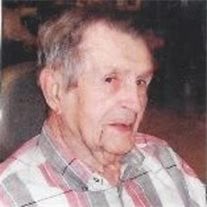 Merle Andress King passed away February 24, 2012 in Farmington, MO at the age of 93 years. He was born May 19, 1918, in Brunot, MO, a son of the late Thomas Edward and Rosa Bell (Head) King. On January 27, 1940 he was united in marriage to Hazel Maxine Ruble who preceded him in death on May 20, 2006. To this union ten children were born; Linda and husband, Bill Skaggs of Iron Mountain, MO, Rita Foley of Bismarck, MO, Glenda Joyce and husband, Marvin Lee of Bismarck, MO, Terry Lee "Mike" and wife, Shelby King of Valle Mines, MO, Gary Lee "Pat" and wife, Barb King of Iron Mountain, MO, Ronald and wife, Cheryl King of Iron Mountain, MO, Roger and wife, Kathy King of Bismarck, MO, Randall and wife, Laura King of Bismarck, MO, and Nathan and wife, Barb King of Perryville, MO. He was preceded in death by a son, Merle Edward "Jack" King Jr. Also surviving are two brothers; Ben King of Norfolk, VA, and Donald King of Bismarck, MO, and many, many grandchildren, great-grandchildren, and great-great- grandchildren as well as a host of nieces, nephews, other relatives and friends. Merle was also preceded in death by his brothers; Loyd, Horice, Cletus, James, and Glenwood. Merle served his country in the Unites States Navy during World War II. In lieu of flowers, Memorials may be made to go Brewington Cemetery Association.

The family of Mr. Merle Andress King created this Life Tributes page to make it easy to share your memories.