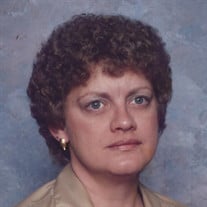 Alta Marie Hutson of Arcadia, Missouri passed away March 31, 2019 in St. Louis, Missouri at the age of 64 years. She was born November 11, 1954 in Ironton, Missouri the daughter of the late John and Norma (Milburn) Gay. On June 21, 1980 she was united in marriage to Bob Hutson who passed away four days after her death. Alta is survived by two brothers; Michael Gay and wife, Tammy of Pilot Knob, Missouri and Larry Gay and wife, Christy of Columbia, Missouri, three nieces; Melissa Burgan, Sara Allegree, and Amber Edgy, three nephews; Toby Gray, Jonathan Gray, and Adam Hutson and eleven great nieces and nephews; Devon, Taylor, Ashley, Nate, Trevor, Damian, Connor, Carson, Savannah, Addison and Drake as well as a host of other relatives and friends. She was preceded in death by her nephew, Ryan Hutson. Alta was a graduate of Arcadia Valley High School. She worked as a manager for Walmart for over 30 years. In the past Alta attended Arcadia Valley Assembly of God Church. Alta most enjoyed taking care of the people she loved.

The family of Alta Marie Hutson created this Life Tributes page to make it easy to share your memories.

Send flowers to the Hutson family.