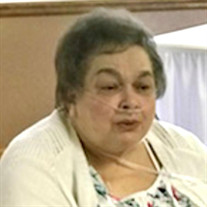 Alice Christena (Wallen) Pogue known to most as Tena, entered into eternal rest August 12, 2021. She was born in Ironton, Missouri on October 19, 1950, to the late John Smith and Leona Marie (Dotson) Wallen from Belleview, Missouri. She was... View Obituary & Service Information

The family of Alice "Tena" Pogue created this Life Tributes page to make it easy to share your memories.

Alice Christena (Wallen) Pogue known to most as Tena, entered...

Send flowers to the Pogue family.